Putting the “Union” back in “Union Station” 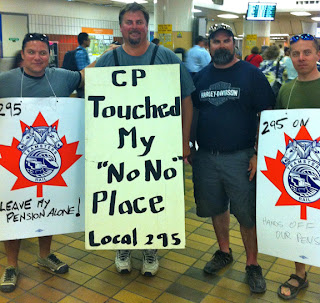 I’m pretty sure you’re not supposed to have a rally in Union Station in Toronto in the middle of rush hour. I’m pretty sure you’re not supposed to wear picket signs and hand out union flyers either. But there they were, Friday May 25, at 4pm – a good two dozen or so striking employees of CP Rail, members of the Teamsters, doing all of the above. The picket signs were big and bold, saying “Leave my pension alone,” and the picketers, instead of being thrown out, were being welcomed warmly by the VIA, GO and TTC employees who were in Canada’s biggest transit hub that day. Something had changed in Toronto since I was last here.

Maybe it was the issue. The employer is after these workers’ pensions. Just two of the bullet points on the leaflet being distributed were:

• CP wants to reduce pension income for active employees … in some cases by as much as 40%;

But another explanation comes to mind, to explain this confident picket in the middle of rush hour, and the warm reception from the traveling public. Maybe a little of the spirit of Quebec has come to Toronto?

After all, just two days before, what is being described as “the single biggest act of civil disobedience in Canadian history” had taken place, in Montreal. Our sisters and brothers in Quebec are up against the draconian Bill 78 which puts very severe restrictions on the right to assemble for political purposes. The massive crowd which defied that law might have been 250,000 strong. The lowest estimate was 75,000 (Mennie et al. 2012).

When a quarter of a million stand up to defy an unjust law, it gives all of us confidence to stand up. The 4,800 CP rail employees now on strike – members of the Teamsters Canada Rail Conference (TCRC) – are certainly doing just that. TCRC president Rex Beatty said that the “railway’s demands were unacceptable because while workers are seeing their pensions decimated, managers are seeing their benefits increase. ‘CP management … shouldn’t underestimate our members. This is an important issue and we’re going to see this fight through to the end’ ” (Teamsters Canada Rail Conference 2012).

A picket sign at union station put the matter in more colloquial terms. “CP touched my ‘No No’ place”. These workers who are saying “No” to cuts in pensions and benefits deserve our support. And in all of our struggles, we need to keep front and centre the story of the magnificent movement in Quebec which is inspiring students and workers all over the world.